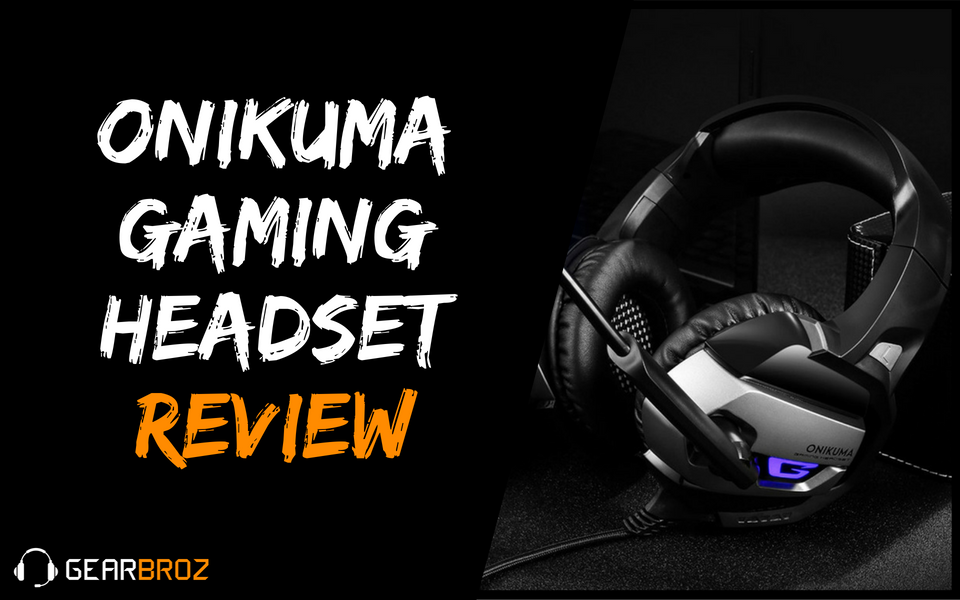 When comparing these to a market leader like the HyperX Cloud Stingers, no, you won’t be getting better sound quality, nor will you be getting a crisper microphone. However, the Onikuma Gaming Headset costs a lot less (see lowest price), but without losing much of the sound quality nor the microphone quality. There’s not much to complain about, and because of the price point, it’s not a terribly big commitment to make either.

The gaming headphone market is a difficult one to navigate – you’ll probably be baited into purchasing headphones for the gamer aesthetics rather than for good output and input sound quality. Although there are a few gems in the haystack, namely the HyperX Cloud II, most of these – with a few exceptions – would have you end up paying a pretty penny. That’s why we’re going into detail about one of these wonderful exceptions.

The Onikuma Gaming Headset, surprisingly, doesn’t have an over-the-top type of look that other gaming companies are known for. You won’t be finding any RGB on these pairs of cans, but that doesn’t take away from the aesthetics. It’s mainly made out of plastic, and it’s rather flexible around the band; thankfully, these don’t feel like they’re going to break when you stretch them out.

These headphones also come with a repositionable microphone. Not only can it be moved vertically like most gaming headphones, but the upper section of the microphone is flexible – giving omnidirectional repositioning, which will help with not sounding like your microphone is inside your mouth.

The cushion pads on the ear cups are actually very comfortable, even after hours of gaming. We haven’t had enough time to tell if the fabric will stand the tests of time, but at this very moment, we’re very pleased with the comfort that they provide.

Overall, for the price – you actually get more than you pay for. We didn’t except these headphones have as much flex, and we certainly did not expect the flexible positioning afforded by the microphone.

These headphones are rocking massive 50mm drivers. This may seem like a great thing, but a common misconception is that driver size equates to better sound quality. If you compare a well-built 30mm driver versus a poorly built 50mm driver, you’ll quickly come to realize that size doesn’t matter (pun intended).

The impedance on these headphones are on the low-side, at 16 Ohms. This doesn’t really mean much, unless you’re planning to plug these into something more demanding than a video game console or a PC. Without getting too much into the nitty-gritty, the basics of impedance in relation to headphones is the higher the impedance, the more versatile the headphones – they can handle stronger amplification. If you’re planning to plug these into a guitar amp or a DJ mixer, you’ll eventually blow them out.

The sensitivity is set at 114 dB, give or take 3 dB. The higher the sensitivity, the louder the headphones can get. A typical range would be 110 dB to 120 dB – but a difference in 10 dB is actually greater than you’d expect. While, it’s not a deal-breaker if headphones have lower sensitivity, it will be harder for those types of headphones to get loud.

The last spec that Onikuma provides is the frequency, which is set at a range of 20-20kHz. This specification is addressed last because it’s practically useless. Many companies, like Skullcandy for example, will claim that they have the same range, but many will struggle to produce those sounds at the lowest and highest ranges.

The final thing to note in this section is that specifications don’t necessarily translate to sound quality. They are more like guidelines to look for. The best way to figure out if the sound quality is good is simply to put them on and test them out.

The section you must have been waiting for. If you were expecting sound quality that will beat out HyperX or Turtle Beach, then you will be heavily disappointed. But if you keep your expectations for budget-friendly gaming headphones leveled, you should be pleased. They’re great for gaming – the pair we tested got rather loud, and the audio was crisp enough for us to hear footsteps when playing games like Call of Duty and Overwatch. For music, they don’t necessarily handle bass that well, so everything sounded flatter than normal.

We have also noticed that you introduce quite a lot of static if you bump the audio jack, meaning the contacts of your device isn’t transferring well to the connector – this could be just the unit we received, but it was worth pointing out.

In terms of the output quality from the attached microphone, it was acceptable. The mic sounded as if it was slightly muffled, but it wasn’t a problem since it was still very clear. Again, this was not an issue to us, but just something to be pointed out. Honestly, at the price point for these gaming headphones, I was happy with the quality and the flexibility of it.

While the sound from both the input and output is just acceptable, good at best, you get a lot for what you pay for. It’s a great budget option since you even get a microphone in the first place. As long as you’re only using these for gaming, there shouldn’t be any major issues.

When coming into a pair of budget-friendly gaming headphones – definitely have grounded expectations. Don’t go in expecting headphones that will be extremely crisp and have a high quality microphone; be realistic and you might even be surprised. We certainly came out pleasantly pleased with our purchase. You basically get what you pay for at this price point: it’s a cheap, no-thrills type of peripheral, targeted to those who don’t want to pay an excessive amount of money for bad sound quality.